Just for fun - "Silver Wings" by The Knitters featuring John Doe and Exene Cervenka of X fame.
Posted by Erin at 10:23 AM No comments:

I'm committed to using up a certain yarn this year. Yarn that I purchased in 2007. Yarn that never seems to go away no matter how often I knit with it. Focusing on this yarn is a little painful just because it's been around for soooo long. This is my first completed item from Project Palette Stashdown - a little zig zag hat.
Pattern: Little Zig Zag - improvised from my own noggin
Yarn: Knit Picks Palette - approx. 130 yards
Needles:  US #1 and US #3 Clover 16" circular and dpns How'd I do it? Cast on with one color and change to another color for the 1x1 ribbing. Throw in some zig zaggy stripes so your kidlet's head looks like an Easter egg and do some decreases to finish it off. Oh yeah, this is stranded colorwork so you have to know that, too. Easy peasy and this one is a bit snug so I have plans for a second larger size (and maybe a freebie pattern release, too).
Posted by Erin at 6:33 PM 2 comments: 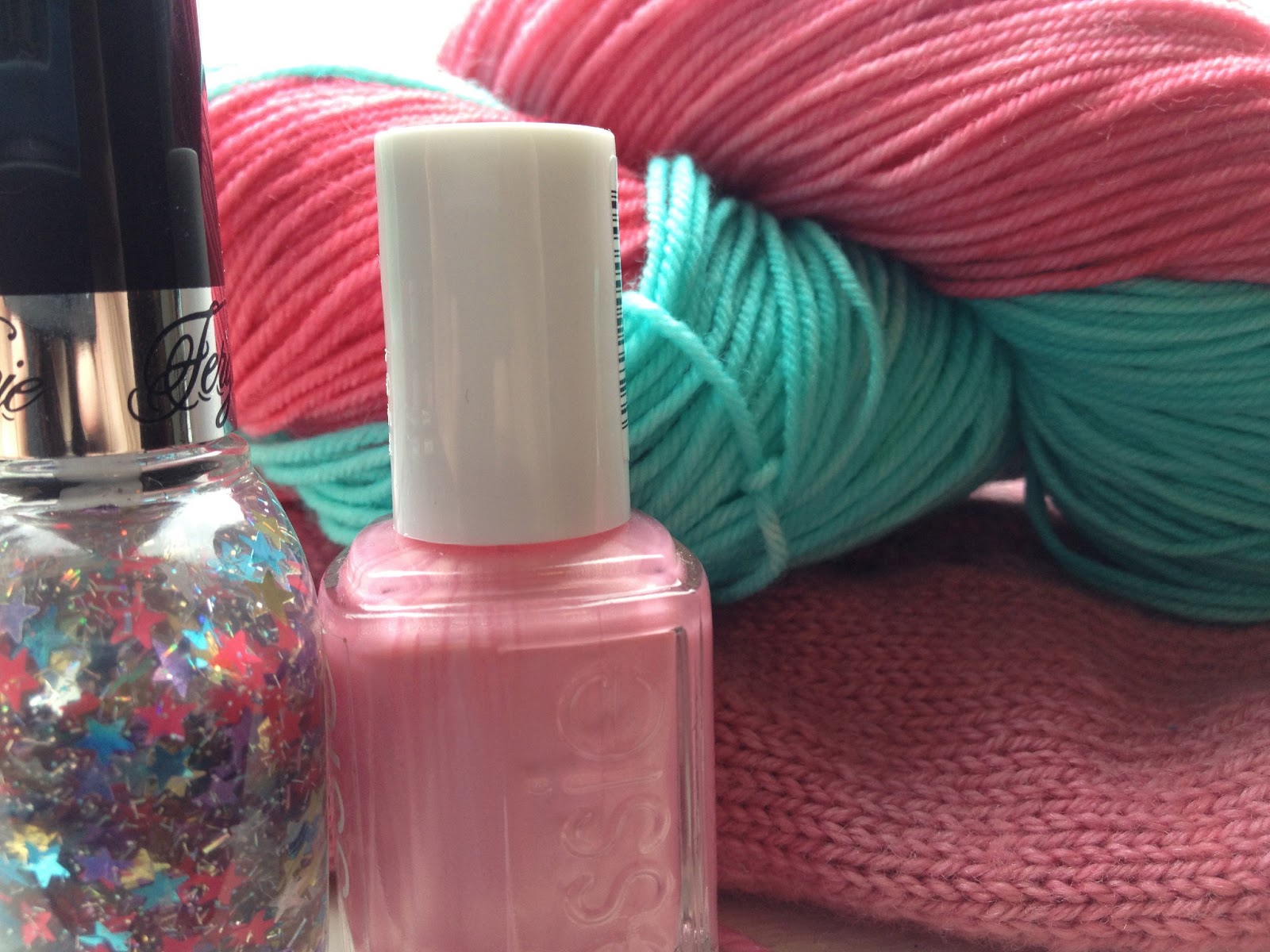 A strange thing is happening and I can only blame it on the advent of Spring- I'm being drawn to pink!

It started with some yarn I, um, stumbled across and before I knew it I had thrown it in my Etsy cart and placed my order. It came in the mail last week and I've been pondering a pattern that will make the most of the color shift between the light turquoise and bright coral pink. Suggestions? If I unhank the skein, half of it is coral and half is turquoise with little bits of white between the two colors.

I did some secret knitting for a swap (you can see it under the yarn in the back) in, you guessed it, pink. I'll be doing a full blog post after the swap and you'll be able to see the entire project. What I can say about it is that the yarn is lovely lovely lovely.

On my way home from work yesterday I stopped at the store to pick up some things and decided to treat myself with some new nail polish. I ended up with Essie's Pink Diamond and Wet & Wild Fergie in Hollywood Walk of Fame. If you're going to go pink you may as well go all the way and add some sparkle, no?


Little A is thoroughly enjoying my foray into pink and is making suggestions as to knitting projects and future polish purchases. We'll see how long this color obsession lasts.

Sometimes all you need is the right combination. My first ever purchase from the lovely Miss Babs (made in 2007 or 2008) is finally making its way into some socks. The color is a nice minty green, named Coventry, that looks silvery in lights but mostly makes me think that Spring is finally arriving. This is the first sock completed through the gusset and I'm knitting my way toward the toe. If you'd like a pair for yourself the pattern is Cadence Socks by VeryBusyMonkey and it's free via Ravelry.

Last week was a complete and utter wash. I had many, many things to do and although I gave focused time to each item on my list nothing seemed to get done or stay done. I was exhausted from attending Vogue Knitting Live Seattle and felt that there just weren't enough hours in the day for me to do what needed to be done. Do you ever feel that way? In any case, this last weekend was incredibly helpful in recovering my mental and emotional health. I made some progress on my Diffraction shawl. The green stripes are getting narrower and the teal stripes are getting wider just as they should be doing. Each round of knitting is hundreds of stitches at this point so I only pick this up when I'm engrossed in a social activity or very good movie (or episode of Buffy). I logged my newly acquired stash yarn into Ravelry and contemplated the future of this lovely gradient set I purchased from Melanie of Black Trillium Fibres. Do you have a favorite pattern for gradient yarn? I have 658 yards in this set.

I also managed to: change out bedding, clean the bathroom, vacuum, walk to the farmers market, sort and wash Little A's baby knitwear, make fingerpaint, do my nails, make potato and leek soup, complete 2 (!!!) homework assignments, and even fit in some knitting. I have a three day weekend coming up so I hope that this trend continues and I have more to show next week!
Posted by Erin at 2:59 PM 2 comments:

"This Must Be The Place" from Speaking in Tongues by the Talking Heads.


Over the weekend I watched This Must Be the Place starring Sean Penn as a retired rock musician. Cheyenne (Penn) arrives too late at his father's deathbed and decides to take up a revenge plot against the Nazi who tormented his father during WWII and who is now hiding somewhere in the US. The film is inconsistent in parts but overall I found the dark humor a nice contrast to the drama of the revenge plot. Special kudos to Frances Mcdormand's portrayal of Cheyenne's wife (I love her!) and David Byrne's wonderful cameo.
Posted by Erin at 11:47 AM 1 comment:

I'm exhausted from my wonderful weekend at Vogue Knitting Live Seattle* working at the Fiber Gallery booth. I met a ton of great people and if you came by to say hello, thanks! It was a pleasure meeting so many Doubleknit Podcasts listeners!


From the wonderful album, Horses, by Patti Smith. Motivational music for the Monday blues.

*Where I fell off the Cold Sheep bandwagon quite thoroughly. But I'll share with you, so yay!
Posted by Erin at 10:50 AM No comments: 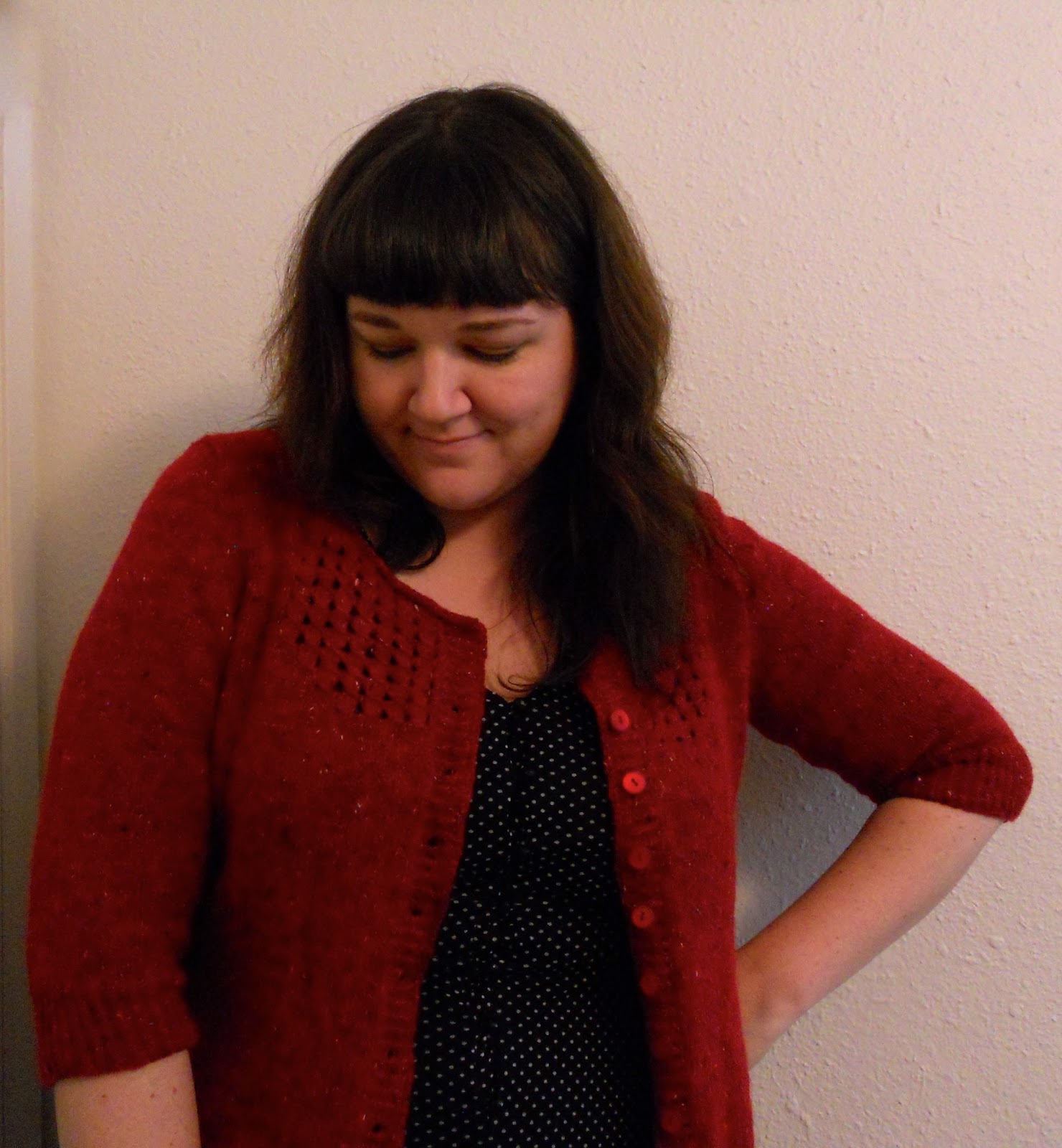 This sweater is an instant favorite! It fits seamlessly into my wardrobe and is light and lofty and easy to wear. 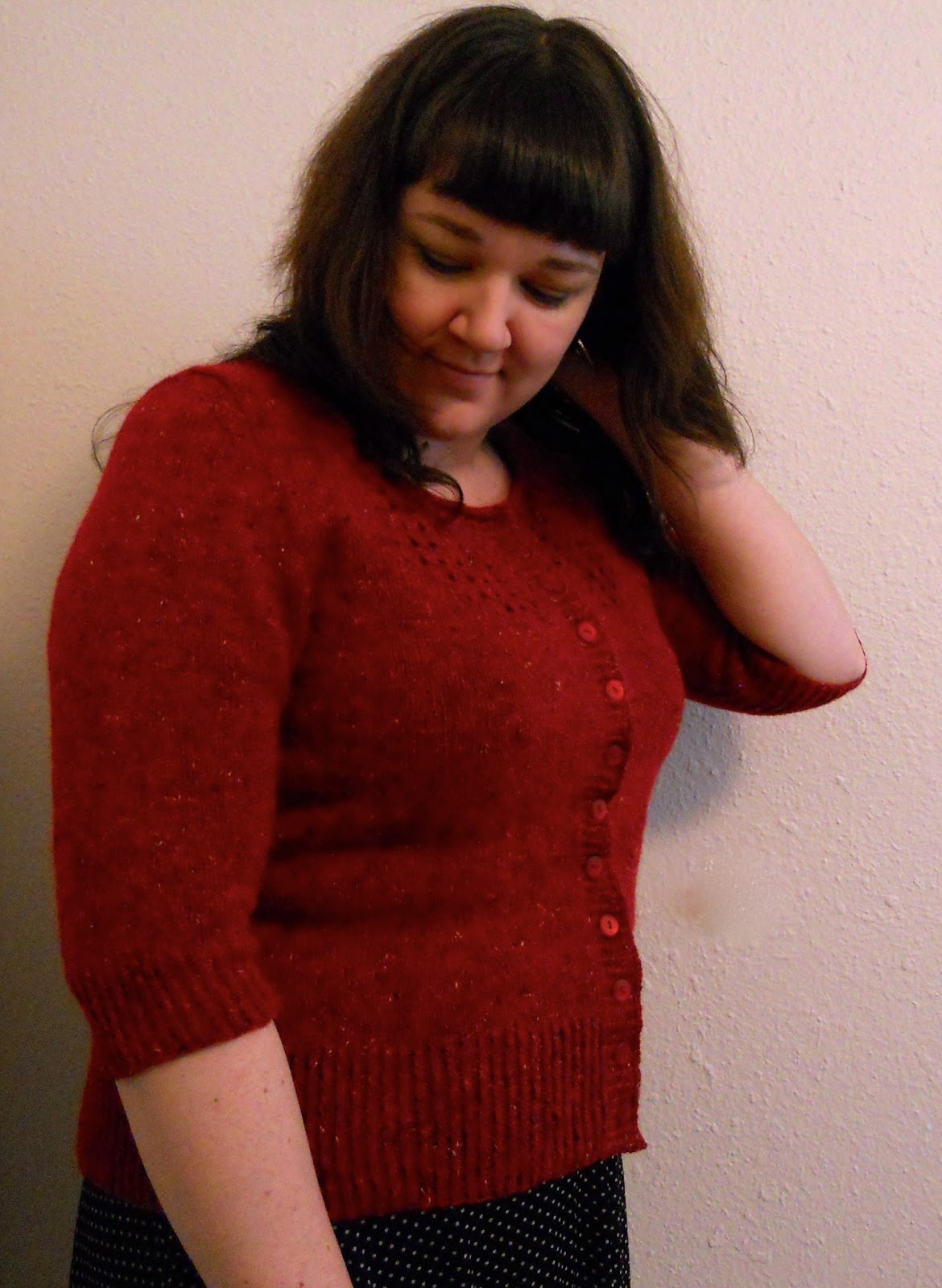 Pattern: Audrey in Unst by Gudrun Johnston
Yarn: Rowan Felted Tweed DK in Rage; #150
Needles: US #3, US#4, US #5 Hiya Hiya Sharp Interchangeables
Mods: There are only 30 rows of twisted rib at the bottom rather than 36 and I lengthened the body to 15 inches before splitting for the sleeves. After picking up for the sleeves I started the short rows seven stitches past the shoulder seam rather than 5; this fixed the pointyness of the sleeve cap that some people complained about in their project notes on Ravelry. The sleeve cuffs were knit using the same needles size as the rest of the sleeves (US #4) because my yarn has alpaca in it and I didn't want the cuffs to stretch out too much and become floppy. The neckline is finished with an i-cord bind off and some people had issues with the back of the neck rolling back toward the body of the sweater so I changed the rate of pick up for the back neck only - using the same 3 of 4 ratio as the rest of the neckline rather than the called-for 1 to 1. I'm wearing the size 42 bust which gives me -1" of ease and the cardigan looks good open or closed with no pulling or gaping at the bust when buttoned.
Posted by Erin at 8:11 AM 2 comments:

This week is seeing some serious Spring Cleaning at chez ErinB. Last weekend I performed the onerous task of sorting and purging Little A's dresser and closet and now I have piles of knitwear to wash, dry, put away, and give away. I've moved on to my own closet and even my stash! Buried under sweaters that need fixing and bags containing items for charity I rediscovered my bag of scrap yarn. It's a big bag. I dragged it out to my favorite knitting spot and dug out two partial skeins of chunky yarn from the depths of the bag. After an evening of knitting I have a hat! Pattern: Giving Comfort by Alicia Landi
Yarn: Malabrigo Chunky in Verdes and Oceanos
Needle: US #10 Addi Turbo and Clover Bamboo DPNs
Mods: I omitted the texture pattern and knit stripes - four rows of green and three rows of blue. I have the teeniest bit of blue left over.
Posted by Erin at 9:34 AM No comments:

I've stumbled across a couple of blogs recently that have got me thinking about a myriad of subjects; apparently I've got more brain room for that since graduating from UW in December. Both of the blogs I'm reading deal with classism (among other subjects) and how, as a culture or as individuals, our particular station in life reflects our upbringing and also negates or discounts the upbringing of people of a different social strata.

Class Rage Speaks is a now defunct tumblr dealing with classism. I've found her posts to accurately describe, sometimes painfully so, what it's like to grow up poor and be immersed in a social and educational environment where people have absolutely no clue what poor means. This post in particular struck a chord with me. As someone who grow up poor and continues to struggle financially I've become very observant of the nature of classism in different spheres of my life - it's hard not to do so when confronted by it on a regular basis. Posts are thought-provoking and relevant to everyone, no matter the class you come from or inhabit.

This Ain't Livin is a blog that covers a variety of topics and is written by a fellow Northern Californian (same county even). I found this post on Period Fantasies entirely fascinating along with this post on class and information. I've found her book reviews to be engrossing and entertaining.

Generally speaking, I try not to get too political on the blog but I've been thinking long and hard about class issues and education and class issues in education due to recent developments in the Seattle school system. I hope you take a moment to read through some of the linked posts and start thinking about it, too.
Posted by Erin at 12:40 PM 1 comment:

"Get Up Offa That Thing" by James Brown. Some music to get your Monday going; I know I need it.
Posted by Erin at 9:23 AM No comments: 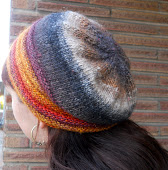